When I was a 4th grader, my mom asked if I would like to play an instrument.

I don’t know exactly how I arrived at the bass violin, but that’s the one I ended up with, like the one in the picture.

It could be because I was always tall for my age, reaching six feet at about age 14 or 15.

(After that, I was fairly average height for boys in my high school.)

Playing the big bass, as I refer to it, was fine.

But, by the time I got to 6th grade, I had a six-string guitar and wanted to get a bass guitar, as well.

My first bass guitar was a knock-off Fender Precision bass, similar to the one in the photo. 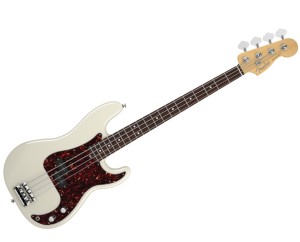 I remember the “action” (i.e., the height of the strings from the neck) was relatively low, which made it easy to play.

But, the lower frets buzzed when played and I could never get rid of it, even when raising the action.

It was a decent bass but I wanted something newer and, frankly, cooler.

Then, Gibson introduced a line of rock bass guitars, with the primary models being the Ripper and the Grabber.

The names alone were cool! But, while the Ripper sounded more dangerous (and what skinny, pimply, math nerd isn’t desperate to be perceived as just a little dangerous?!), the Grabber was the cooler looking bass.

Why? Because while the Ripper has a conventional two pickup set-up, the Grabber has this crazy, single sliding pickup that you can move forward (toward the neck) for a bassier sound or backward (toward the bridge) for a treblier sound. Very innovative!

I loved that bass and kept it for quite awhile until I got the pièce de résistance – my Ibanez double neck bass and electric guitar.

Talk about a unique showpiece. The thing was massive and weighed a ton. But, no one else had or played anything like it.

And, instrumentally, it put me on the same plane as my bass hero, Geddy Lee of Rush.

I ultimately traded that axe in for a brand new, tobacco sunburst Gibson SG guitar. I had always wanted an SG and was going through a serious AC/DC phase at the time. But, it’s a decision I regret to this day!

I only have one photo of me with that guitar – a grainy black-and-white that you can find on my Shadow the Rock Band page.

Anyhow, my best friend Jeff, took pity on me and more-or-less gave me a natural finish Fender Mustang bass, after I had gone for a period of time bass-less.

Jeff and I played many, many a gig together in high school and junior college.