I’m sitting on a plane returning to the US from Shanghai. As we were taxiing on the runway, this couple who obviously works in the same company, has begun to discuss personnel issues.

The man, who appears to be the superior to the woman, has begun to complain about information that she apparently shared with a colleague in another department.

“I don’t understand why you turned me in like that,” he said. “If we are going to build a different kind of culture, we’ve got to stick together and support each other,” he continued.

She seems slightly defensive, yet replied back to him with her point of view. I won’t include it here, tempting as it is, to avoid sharing embarrassment for the company and perhaps their colleagues.

The man has moved on to more philosophical HR topics with her – still specific about their company – about how decisions are made to target and lay people off.  He apparently deems the process arbitrary, capricious, and on the whole rather unfair. (Class action lawsuit, anyone?!)

Mind you, the guy isn’t whispering. He is speaking with a room-level voice, leaning across the aisle, because his colleague is in a seat across from him.

Since it is one of those transatlantic planes where the center seats are slightly staggered from the side seats and I’m sitting on the aisle directly behind the woman, we form something of an intimate, if unwanted, triangle.

I’m feeling like Harry Potter with his stealth cloak, standing right beside Snape or one of his cronies, conspiring some sort of dark, evil deed on Gryffindor.

They’ve kept going on so long that I’ve finally stuck my earbuds in, because we’ve taken off and reached sufficient altitude.

At least I can get some relief by listening to King’s X and drowning out the corporate dirty laundry being heaped in front of me – not to mention the other 15-20 people within two rows of easy earshot of the conversation.

Has something like this ever happened to you? A situation where you were in a very public place and two or more people started talking about what would generally be considered a confidential business matter?  Perhaps you were in the group.  Maybe you are one of the people that started or carried on the conversation.

In the age of public social networks and the generation of “always on” communications, it seems discretion has disappeared as a value that few, if any, of the American public, well… values(!) any more. And don’t get me started on the influence of reality TV!!

It hasn’t always been this way, at least not in the professional circles in which I’ve worked most of my life.

This summer, I celebrated the 30th anniversary of my first “real” job as a professional, when I started as a new-hire consultant in the Houston office of Arthur Andersen & Co.’s management information consulting division or MICD.

I had 7 job offers coming out of my MBA program at Texas A&M with AA&Co. offering the lowest starting salary. Yet, I took it for several reasons: the variety of projects, the outstanding career path to the partnership that all of the Big 8 firms offered (which few people ever stayed long enough to reach), but most of all the vaunted Andersen training.

From the moment you arrived at Andersen, you began your training, beginning with 3 weeks straight of 8 hours a day of Method 1 “Foundation” courses.

After that, you immediately shipped off to the Firm’s worldwide training center in St. Charles, Illinois, a suburb just outside of Chicago for 2 weeks of immersive, 16-hour days with other new hires from around the world. I found it completely invigorating.

A foundational driver of the training was equal parts professional training to the technical, skills-based training you received.

And, even though most of us in MICD were being groomed to be code-jockeys on systems integration projects rising up to eventually sell them (where you made the big bucks), every consultant got training in professional ethics and the basics of being an auditor.

This training included rather extensive readings, videos, and role-playing exercises on how to conduct oneself on behalf of the Firm.

Among the reading materials, as I recall, was a handbook written by the Firm’s namesake himself, Arthur Andersen. In it, he wrote of the near-sacred trust that the auditor assumes when he or she begins working on behalf of a client.

This trust included high ethical standards, among which were integrity, discretion, confidentiality, and generally conducting oneself  in the highest manner of loyalty, on which others could depend – others being your fellow “Androids” (as other Andersen co-workers and alumni re sometimes called), your family, your business associates, your friends, and most of all, your clients.

We role-played situations involving being discrete. We took tests about being discrete. Then, we watched each other’s backs when we saw Andersen colleagues potentially violating the ethos of discretion.

If you were in a hotel elevator with 1 or 2 colleagues discussing a matter – even if on trip away from the city to a training event – if someone not with the Firm got on, you stopped talking about the matter, or switched subjects.

There was no such thing as a “working lunch” in a public setting, meaning discussing client or other Firm matters at a local restaurant where people at the next table might overhear.

And you never – ever – discussed client business in an airplane, bus, train, subway, or any other public transport. It wasn’t done.

If you saw (or heard) it happening among any of your other colleagues – even if you didn’t know them – you were to counsel them, gently but firmly, to stop.

About the only time I encountered private or confidential information being shared in public was when there was a deep discussion about a particular issue being vetted.

In the process of crossing from a private location – say, a rental car – to a public location – say, the shuttle bus to the airport – occasionally the passion of wrestling with a topic would carry the conversation forward.

However, all it usually took was a nudge or a look, once someone realized the risk, and everyone immediately switched gears. That was it. No more talking – period.

To disregard these values was a major career inhibitor. (The great irony to all of this, of course, is the way in which AA&Co. suffered its demise at the hands of rogue partners in the Firm’s Houston office who aided and abetted the Enron debacle – ultimately, receiving a corporate death penalty vis-a-vis a felony criminal indictment for the Firm’s actions.)

I left many years before that, in the mid-80s, to begin my path as a start-up entrepreneur.  Likewise, the consulting partners of the Firm “left” their audit and tax brethren to form Andersen Consulting, later renamed to Accenture, now a global, management consulting giant.

I suspect some of the early partners who were around when the split happened still get down on their knees every night to say prayers of thanks for the vision, if not profound lucky break, from which they benefited by going their own way.

But, I have great fondness for my time at the Firm. I learned a lot. I transitioned from being a college kid in a three-piece suit to an experienced professional.

And I met some fantastic people who shaped my business persona. Many of them, I’m fortunate to say, are still colleagues with whom I stay in touch, with a smaller handful among my closest professional partners, still to this day.

One thing’s for sure, while today’s indiscrete public ethos has likely lowered my guard a bit, I doubt you’ll ever  hear me talking in public about what my business partners or clients are doing …that is, unless I want you to know about them. If you do, nudge me – the ghost of Arthur Andersen will do the rest! 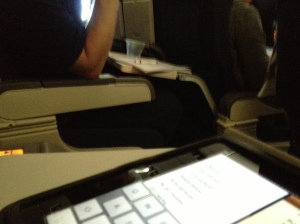 Now, let me get back to that couple’s discussion on the plane. Yes, they are still at it.

In fact, the guy has written out a whole list of employees by name on a sheet of paper that is plainly visible, with different categories of assessment.

(Here’s a picture I took – I tried to be discrete when taking it.)