1 – I’ve picked up a parasite since traveling to China.

I told my wife that we would solve the world’s future energy problems if we could just decode the biological process of this bug. Because it basically turns everything I eat into gas and liquid.

Just think if you could do this with coal. Rather than burning it and unleashing noxious clouds of CO2, you could just burn the gas and use the liquid for hydro or cooling the gas burners or, heck, for watering your lawn.

It’s now midnight my body time, but I’m hanging in there with my overseas system. That system consists of staying awake as absolutely long as I possibly can.

That way, when I finally get to my Chinese destination, I can collapse in an exhausted stupor, have a good night’s sleep, and hit the ground running for a full day the next day.

The system has worked pretty well the past 2 trips; we’ll see about this one. We left about 8 hours ago which means that we still have nearly 6 hours to go. And I’ve come close to completely nodding off in mid-sentence reading, or in mid-swipe flipping through photos.

I’m listening to A Perfect Circle’s Judith hoping that some industrial metal will kick the brain awake for a bit. Maybe head back for a 3rd cup of coffee shortly, to stretch my legs as well. 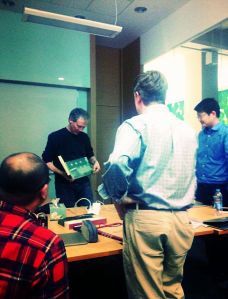 3 – I caught a break on my seat assignment this trip.

I managed to snag emergency row, aisle seats on both legs – from Austin to LA, then LA to Shanghai. And, to top it off, no one in the middle seat beside me, giving me lots of elbow and stretching room.

Of course, what this means on the Shanghai leg is that I get a ‘front row seat’ for watching the parade of travelers – almost all Chinese, although no one is immune – try to figure out the bathroom doors for the lavatories.

However, there are no handles – you simply push the door from the outside, or pull it towards you if you are inside. But, person after person ambles up and studies, probes, pokes, pulls and finally (occasionally with help) pushes the door to get it open.

The other thing they do (or actually don’t do) is shut the lavatory door, often when they exit and occasionally after they enter. For example, a little boy age 5 or 6, has left the door open and peed at least three times in front of me and anyone else who cared to be walking by then.

I’ve learned it’s a relic of history and (somewhat) rural tradition that comes from a very communal style of life, where there is a lack of any kind of privacy.

4 – Clearly, China is working a form of evil selective amnesia over me.

Last trip, I hopped on the plane forgetting every electronics adapter that I have. Thus, I ended up borrowing a multi-prong extension cord from the office for a week that allows mixed voltage devices.

This trip, no sooner did I land than I realized that I forgot my China Mobile cell phone. The sad part was that I made sure to grab the specially pronged China adapter for it, on my way out of the house.

5 – I experienced 2 earthquake aftershocks this trip.

One was in the middle of a speech I was delivering, as the closing speaker of a weekend hack-a-thon that my company sponsored with Neusoft University, called the AppJamm.

The campus was in a suburb (a village, really) north of Chengdu. Chengdu is in Western, central China, not too far from Tibet in the province called Sichuan – the root of the cooking style of the same name.

The earthquake that struck the area on April 20 that killed over 100 people had happened the day before, causing numerous cancellations and delays to flights to the area (including mine).

Everything was running smoothly through the day and we had just presented the final awards. As I was talking, all of a sudden I noticed that the PowerPoint screen behind me was rocking wildly and I heard a collective gasp from the auditorium of students.

Whereas they felt the movement because they were all sitting, I didn’t feel anything since I was standing. Nonetheless, it was a disturbing event and I asked the professors if we should evacuate the auditorium, just in case. ‘No,’ they said: ‘Just keep going!’

Afterwards, one of my colleagues remarked that it was the most earthshaking speech he’d ever attended.

Then, the next day, I was in Shenyang, which is in far north east China, more northern than Pyongyang, North Korea. We had just completed our day’s meetings and were waiting for a driver to take us to the airport.

As we were hanging out in this Mediterranean-style coffee shop, all of a sudden the big umbrella over our table started to sway and the heavy wooden door to the coffee shop went ajar.

This time, I was sitting, and my colleague and I both felt the earth’s movement, for the solid 2 seconds or so that things were mildly rocking. We immediately checked Weibo and Wechat, both of which indicated that indeed a mild aftershock had struck.

6 – This is my last blog about China.

It’s an amazing country, with people who have an incredible drive to improve their lives and that of their children. It must be remembered that less than a generation ago, this economic leviathan was literally North Korean style, slave labor state during the Cultural Revolution.


So, when people (like me) marvel at the crazy, weird, opulent, goofy, inexplicable aspects of the country, one can’t forget how far and fast the country and its people have bounced back in such a short amount of time.

The country has many natural wonders and generous, friendly people. Just listen to the traffic-free morning of bird activity one morning in Chengdu. In addition to being the home of one of Neusoft’s three campuses, it has nearby Panda preserves and is near the ancient home of the Taoist religion.

Goodbye to all of my Chinese friends and work colleagues, both natives and ex-pats like myself, whom I met. I will always remember you.