I’ve participated in four Kickstarter campaigns to date, for which I spent $1,368 total.  Based upon this modest dataset, here are my observations:

Description: A simple and beautiful infusion vessel that can be used for cocktails, oils, teas, or any infusion imaginable.

My pledge level: $175 for TWO black Portholes along with a seasonal cocktail recipe from the Aviary. US shipping included. Estimated delivery, Oct 2012

Experience Summary: It was delayed multiple times, arrived a year late, leaks profusely no matter how much or little we adjust the device.  It’s visually lovely, but a complete failure functionally.  It currently adorns our kitchen counter as an empty display.  We’ve discussed putting layers of colored sand in it for display or maybe making it the most fashionable ant farm ever outside of Toys R Us. 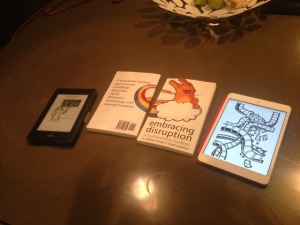 Description: A manifesto about disruptive innovation and the cloud revolution.

Experience Summary: I knew Nathan and had collaborated on blog post with him previously, so I knew that he was a technical talent.  He and his co-authors delivered what they said they would, when they would.  The electronic copy was available on time, with the printed copies received a month later.

We are especially pleased that the team made the product available to others via an open source distribution strategy, via the Embracing Disruption website.  A satisfying conclusion that we were happy to support. 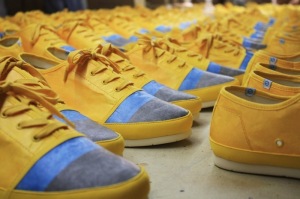 My pledge level: $65 for LIGHT WING 2nd MOVERS – Despite being a bit slow, we have an awesome deal for you, you are still able to grab a pair our limited edition shoes! Get yourself one pair of limited edition LIGHT WING PENCILs. (Suggested Retail: $68). We will also throw in one Tyvek wallet. Estimated delivery, Aug 2013

Experience Summary: After providing after converting my American size shoe to match up with the Chinese manufacturing, the shoes delivered were still too tight by a half-size or more; plus, they make a squeaky, rustling sound like you are walking around in newspaper, when you have them on.

I gave them to my daughter, who has tinier feet and is cooler than me.  I figure she’ll use them to shuffle around in doing garden work.

The whole thing reminded me of the flower-child, crafty projects of the 1960s. A laudable idea, but one that probably won’t be commercially ready until the 3rd or 4th iteration.  I wouldn’t recommend the shoes to anyone, except for the pure novelty factor.

Description: Human beings who are addicted to Blood. Funny, Sexy and Bloody. A new kind of love story (and not a remake of “Blacula”).

Experience Summary:  Awesome, through and through.  I got to spend most of a day on set with Spike Lee, took direction from him, watched him in action set up and film multiple shots, took multiple photos with him, took a slow, hour-long private tour of his 40 Acres and a Mule studio in Brooklyn.

It was worth every penny!! The one slightly unnerving moment was that within days of the project funding, I received a notice that the filming would be within weeks!  But, the timing all worked out, with the help of a little vacation time and some airline frequent flyer miles.

The actual film, currently titled “The Sweet Blood of Jesus” is in post-production with a release expected in 2014.  If you see me, it’ll be in the Martha’s Vineyard bar scene near the beginning of the movie.