Earlier this month, I had a chance to make my annual gift to the local NPR station, KUT. They have a terrific station that mixes mostly local music and a wee bit of talk with all of the great NPR/PRI national programs.

As usual, one of the program segments I caught over the weekend again reminded me how much I enjoy the station. It was a story on the Third Coast International Audio Festival. The story was about the winners of their “Year’s Best of Radio” competition and they featured about the first 5 minutes of one of the stories.

The story was this wonderful, magical piece that gives one a clever look at the subject of fate versus randomness and the interplay of statistics in the determination thereof. Whether you are a stat major or a numbers dunderhead, either way the story “A Lucky Wind” is simply enchanting in my opinion. It carries forward my personal view, touched on with my last post on “Fish and Data,” that numbers are fun!

I hope you can find 15 minutes to listen to the Third Coast story or some of the other winning entries.  Trust me that it will brighten your post-Thanksgiving, Monday-morning blues and give you a unique conversation starter for the bevy of pre-Christmas receptions ahead of you. Enjoy!

Data is cool. First, its very name is both singular and plural, like sheep or fish. (And don’t get all grammatical on me, you datum-is-singular apologists.) Second, it’s so definitive – something is 57% or it isn’t. Pi is 3.14159-etc. Sure, you can argue about the data gathering, integrity, interpretation and the like. But, at least you are arguing about the objective, rather than the subjective. 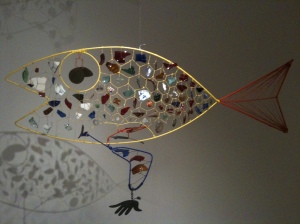 But, what I really like about data is what it reveals about all things measured. It’s in that vein that I’ve been picking up a few interesting recent developments about data, measurement, and the public sector.

First, I read a really good write-up about website measurement in the Google Public sector blog. It’s a really nice case example of data analytics 101 for a website. And, just like the writer, I have had that same giddy feeling when reviewing data from a website’s traffic and other stats.

Second, there was a good write-up about the social media side of data gathering and measurement in InformationWeek. It discusses the CIA’s investment in the social media monitoring from Visible Technologies. Good stuff, but not especially unique – you can get listeners, monitoring, and semantic trending built into nGenera’s collaboration server right now.

Third, we just published our 2010 research agenda for nGenera’s Government Insight program and are excited about some of the research vectors we intend to explore. In the major topic area of “Leading in the age of unbounded data,” we expect to cover into listening, massively customized analytics, orchestrating, and methods for reaching beyond stereotypes.

Content may be king, but data is the kingmaker. If you haven’t done so in a while, I recommend you brush up on the latest in data analytics, visualization and simulation. In a world awash in data, the ability to interpret and apply it in real-time will be increasingly a critical success factor differentiating between market leaders and followers, whether they be public or private sector.

In the spring of 2008, I had a chance to visit FedEx headquarters in Memphis, as part of an executive development event – one of many that nGenera produces. We were hosted by Rob Carver, CIO of FedEx (still called FedExKinkos at the time), and the venue for our visit was FedEx Labs.

As part of the agenda, the FedEx Labs staff had graciously agreed to host small groups of our event participants in round-robin style in different parts of the office, to basically “show and tell” us what they were working on. There were four main stations we were invited to tour, as I recall, that each had some intriguing research and technology and/or process innovation that was in some stage of design.

But the one that caught my attention the most was the room with what looked like one of those 30-year old clackety high-speed dot-matrix printers that used to plow through box-fulls of green-bar paper back in the day.

Except instead of the device being a dot-matrix printer, it was a special-purpose ink-jet printer. But, here’s the cool part: no ordinary printer, this device printed in 3-D! In other words, rather than spraying the ink onto paper or some other printable medium, the printer slowly built micro-layer on top of micro-layer of ink until a fully-formed 3-D model was created!

The FedEx lab techs showed us numerous models that they had “printed” around the room – everything from model ships, to e-gaming avatars, to prototype shoe designs. In fact, I believe they said that personalized “World of Warcraft” figurines turned out to be the most popular printed items up to that point, in limited pilot tests. All printed items resembled something you would expect to make with a clay mold and kiln, with the resulting items having a hard form and a grayish-white exterior.

Fast forward 18-months and the ability to print “things” took another commercial step when two weeks ago Xerox announced that it had proven the ability to print an integrated circuit.  With the development of a new silver ink, they claim their “scientists have paved the way for commercialization and low-cost manufacturing of printable electronics.”

Now, stick with me while I make a couple of leaps ahead. First leap: remember Furby’s? Well Furby 2.0 will be upon you this Christmas my friends, in case you haven’t seen the ads. Not surprising, but I’m already looking ahead to Furby 3.0 when, you can design and print your own personalized Furby. Or, similarly, that little robotic dog – the Aibo – that Sony introduced but couldn’t sustain due to expense.

Ok, one more leap: remember the Fifth Element? That Bruce Willis / Milla Jovovich sci-fi, action movie where Gary Oldman plays an arms-dealing, thinly-veiled Ross Perot of the future? Well, there’s a scene in the beginning where Jovovich’s genetic material is put in a people-sized version of the FedEx printer and, in a matter of movie moments, printed right before our eyes, in her birthday suit finest. (Although with conveniently PG-13-appropriate fashion-future band-aids strategically situated on her Victoria Secret-toned bod.)

I’ll close by paraphrasing what a mentor said to me a long while back: “Our nature is to invariably over-estimate how quickly an innovation will make an impact, but likewise under-estimate the long-term, profound impact of the innovation – an impact far beyond what we expected.”

In my opinion, our nature is also to create and I look forward to seeing the profound impact that innovations like the examples from FedEx Labs and Xerox have for us in the future.

Anyone who has followed any of my writing knows that I’m fascinated by the man-machine continuum and especially the fluidity of technology, as we use it in physical lives, virtual worlds, and augmented realities.

Not a day goes by where there isn’t something new that further informs and fills in the gaps of this physical-augmented-virtual continuum. I’ll pull one item of interest from each of these realities.

First, physical reality. One of the things I totally dig about the ubiquity of microprocessors, especially in increasingly “smarter” mobile phones, is the ability to have them real-time “crunch” data that enriches your life – your problem-solving, your choice-making, and your other actions – when and where you need it.

A number of good examples were showcased at a Government 2.0 Expo/Summit earlier this fall that I’ve written about. One that I regularly cite, because we’ve all been affected by it, is a public safety mobile app. Called “Are You Safe?”, this app actually provides a visual gauge that mashes together localized crime data and your GPS-detected position, giving you a real-time indicator of crime.

While one could argue this being a “leading” or “trailing” indicator, nonetheless I’m fascinated by the concept. Just think of the other real-time indicators that one could receive by crunching data sets: climate change/environmental indicators, infectious disease monitors, etc.

Second, augmented reality. I read about a little DIY video off of Slashdot that caught my eye, featuring the provocative headline of building your own virtual reality goggles using an Android-enabled phone. Now, the video is cute, thought not something I would take the time to do, kind of in the spirit of the popular Nintendo Wii video that was the rage two Christmas seasons ago, when an engineer showed how you could reverse the motion tracker that comes with your Wii system to create immersive, 3D games.

But, what I found more intriguing (as usual) were the comments in the slashdot commentary. I especially found this one to be immensely intriguing: “What would actually involve a bit of innovation is if someone hooked up those glasses to, say, a pocket beagleboard or similar device capable of video output, and ported/hacked Google Street View to output stereo information…”  Think about that for a moment: you’ve just created a relatively low-cost device that enables a blind person to “see” the precise details of their surroundings, real time!  Now that is life altering augmented reality.

Third, virtual reality. For this one, I actually want to draw attention to the work of Aric Sigman (http://www.aricsigman.com). Sigman, Baroness Susan Greenfield, and others have been documenting the consequences of a sustained, increased participation in highly immersive virtual worlds and commensurate decreased “physical” world participation. To quote from Sigman’s article “Well Connected” in the February issue of Biologist earlier this year:  “While the precise mechanisms underlying the association between social connection, morbidity and mortality continue to be investigated, it is clear that this is a growing public health issue for all industrialised countries.”

Hear, hear.  My recent personal reflection on how too many people emphasize the “media” part of “social media” and don’t appreciate enough the importance of the “social” – especially the physical, human contact aspect of social – is an affirming data point of one.  Now, let me hear from you!