The Qin dynasty (not to be confused with Qing, seriously!) was the first imperial dynasty of China and, thus, is the namesake of modern China.  (Qin = Chin, in pronunciation.)

It is with tongue-in-cheek but also great respect for the warmth and industry of my many new Chinese friends, that I reflect on a charmingly odd 12 months living in China with this riff on the 12 Days of Christmas.

TWELVE middle-aged ladies: they were out by the Xintiandi subway stop, most every night, country & western line dancing to Alan Jackson on a boom box

…An ELEVEN a.m. bon vivant: but what was extra-special about this middle-aged gent was that he had a hair comb-over so long that he had literally shaped it into the style of a golf cap, complete with brim

…TEN well-dressed dogs: little dogs are the norm in Shanghai: poodles, terrier, pugs, etc. But, what distinguishes them are their outfits: shoes, pants, coats and hats – most dogs are much better dressed than many people you see

…A NINE amp power drill: being wielded by a guy in the pouring rain squatting in a puddle of water, plugged into an exposed electricity outlet, with everyone else walking in the puddles & rain too – me included! 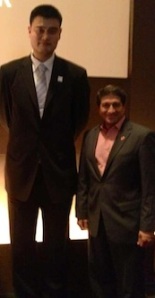 …EIGHT little kids squatting: in fact, pretty much every little kid under the age of two has a slit in the rear of their pants so they can “do their business” directly where they stand or squat… a visual tribute to the pragmatism of the Chinese parent

…SEVEN-foot tall Yao Ming: former Houston Rockets basketball superstar was a neighbor in my apartment complex – you can’t miss him, as he is probably the tallest person you will ever see in a Starbucks, anywhere – and told me during a brief chat that he really liked Austin because it was a “such a quaint small town”

…SIX legs, no pants: the legs being attached to any three women, who are often linked arm-in-arm (although a pair of women is more common) in the winter, basically only wearing black leggings below the waist, with their derrieres barely – not always – covered by a warm sweater, top, or coat. You’ll have to give it to Chinese women: a majority of them have the figures to get away with the style; a combination of their fruit & vegetable diets and genes, no doubt

…A FIVE second stun: when a well-dressed young woman strolled up and swatted me with a rolled up newspaper, as I was sitting with my wife on the outside deck at a coffee shop, one lovely Sunday afternoon.  About the only thing we could think of that had caused her moment of huff was when I had given her an odd stare, searching what I thought was her perplexed face, after she stood aimlessly behind my chair for a few seconds. All I can say is Rebecca nearly fell out of her seat, laughing so hard, as the woman strolled off and I was left speechless.

…FOUR-foot tall trash bag: this was the dark-gray, heavy-duty variety of trash bag, which in itself is nothing unusual, until you see (by all appearances) a normal-looking guy walking down the street wearing it for wardrobe, shaped like a pair of Cossack pants – and looked pretty stylish, in fact. No, it wasn’t raining.

…A THREE story tall tower of cardboard: …and Styrofoam, stacked & tied down, being peddled by an elderly gent at least in his sixties on a bicycle cart for delivery to the recycling center. Seriously, it was taller than the average house; those pictures you may have seen about amazing Chinese feats of transportation ingenuity aren’t Photoshop’d – they’re real!

…TWO ladies walking: they were strolling in opposite directions, but directly towards each other, neither ever swerving until the point when they literally stopped in front of one another, nose to nose – just like in the Dr. Seuss book – before they each sidestepped to go around the other

…And a partly-carved hole in my ceiling. Shortly after returning from a trip to the US in August, we noticed after a heavy rain one afternoon that there appeared to be a wet wood around the doorframe of our apartment’s hallway bathroom.

We lived on the twelfth floor of a thirteen floor building. So, we naturally assumed that a leak had sprung in our above-stairs neighbor. We called the property manager, who sent a few different repairmen to inspect.  They said there wasn’t a problem on the 13th floor and, thus, they needed to inspect further, so they cut a big hole in our hallway ceiling.

From that point forward, about every other week on average, they sent a few people over to stand on a chair, stick their phone-illuminated flashlights (they never seemed to have a real one) up into the dark recess of our ceiling space, argue for one to ten minutes and then say to Rebecca and me “call us when it rains.”

It rained, we called, repeat cycle. Through monsoons (literally!), fall/winter freezing rain, and… well, you get the idea. As of our final moment of departure, the hole was still there, four and a half months after we first reported the leak.