It turns out that the space station is circling Earth.

The humans identified the Himmincats ship as a UFO and force them to land at NASA’s Johnson Space Center in Houston.

Lyla, Bendle, Troy, and Girlen are captured by the military and confined. Their ship is guarded, but Troy sets a protective shield on it that prevents the humans from entering it.

BARNIE, who has been playing possum, tracks where the Himmincats are held and sets out to rescue them.

Rather than being a violent rescue, BARNIE does a number of humorous things to get to them:

They get back to the ship, take off, and escape past the space station.

The evil Dr. X, who stowed away, has taken over the ship and is piloting them off-course.

He has sealed himself on the bridge. He tells them through the ship’s speakers that he is going to shut off power to all of the rest of the ship and they will die.

He can’t risk these “children” being in control of the mission. 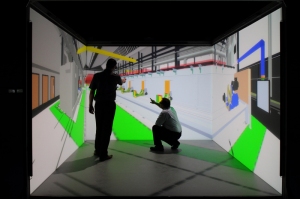 BARNIE informs the Himmincats of the “travel” room on the ship. They go there.

It turns out to be a room that allows you to imagine you are anywhere, at any time.

They imagine that they are back on Orth, during the building of the rocket ship and they observe the special codes that Dr. X designed into the ship to allow him to take over the ship.

With that knowledge, and BARNIE’s help, the leave the “travel” room and take back control of the ship.

Dr. X runs from the bridge, towards an emergency shuttle craft, in which he flees.

They watch him and pursue him for a brief time when, all of a sudden, it explodes in space.

They ask BARNIE if there was a malfunction, when they realize that, no, it was struck by a missile.

Just then, the on-board computer tells them that they are approaching a space station. 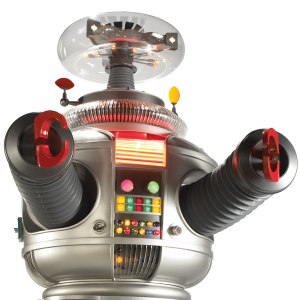 The rocket speeds on to another world.

They are introduced to their on-board robot helper, called BARNIE (Battle Armored Robot, Neural Information Engine – or whatever).

BARNIE flies the ship. He looks a lot like “Robot” from the Lost in Space series (glass head, giant vacuum cleaner-style body, expandable and retractable arms).

The exceptions are that he has four arms, one coming out of each quarter of his body, he is a shiny black, and he speaks with a flat monotone voice.

He takes the kids, along with Troy and Girlen, to the ship cafeteria. They order their food from the on-board computer. It comes in lots of different colors.

Bendle hates the way it looks. He’s still sad (and now angry) about losing his mother.

He flings the food at BARNIE, which is in big meatball-like lumps and globs that look like paint.

The others join in and soon they are consumed in a giant food fight. (You can describe this pretty hysterically, and the kids can get into it.)

They are suddenly interrupted by a warning signal coming from the bridge of the ship.

There are 2 other young adult Himmincats — a male named Troy Vixen, and a female named Girlen Lakes – that are selected with Lyla and Bendle.

They are all transported to the place where the rocket is to be launched.

Everyone on the planet is beginning to feel the heat from the coming supernova. They all know that there are only days left.

The chief scientist for the rocketship program is named Dr. X.

He trains them, but also scopes out where he can stowaway on the rocket – he believes that he deserves to live as well.

The training is complete, the rocket is ready, they get aboard and blast off.

As they travel, the final explosion of the supernova occurs, and the sun grows to hundreds of times its size.

It consumes the planet Orth, as Lyla and Bendle can see in the viewing window of their rocket ship.

Even as they shed a tear, the image of their father in their heads is joined by a new image of their mother and the parents say to the children, “don’t worry, we will be with you always.”

The next morning, they got up early and traveled to the city…thousands of Himmincats of all kinds were traveling as well.

On Orth, there were no such things as roads. Instead, Himmincats traveled in hovercrafts or on moving platforms.

The moving platforms were like escalators, only flat – more like the “people movers” that you see in airports or shopping malls. The difference was they went much faster and were as wide as a road, so that many Himmincats could fit on at once.

The only way to get on, since it went so fast, was by first sitting in a little chair (with your luggage, if you had it) that was kind of like a ski lift.

The chair was in a little on-ramp area, like those of a feeder road, to the side of the people mover.

Then, every few seconds, after someone sat down in the chair, it would move down the ramp towards the people mover (which the Himmincats called the “Cat-way”), slowly at first, building speed until by the time it reached the Cat-way you were traveling at the same fast speed that everyone else was.

When a beep sounded, you had 10 seconds to just slip out of the chair onto to the mover. When you were out, the chair rotated back overhead for another waiting traveler.

They get to the city. The children are sorted by males and females. Their mother kisses them and says goodbye – knowing that if her children win, they will never see each other again.

She closes her eyes and places her paw on their heads. Their heads get hot and they realize she is imparting an image of their father that they will be with them always (she says).

Their father isn’t there – he’s a mystery that you can introduce at a later time.

They begin the contests. The contests can really vary in many ways, depending on the interests of your children.

When I told the stories to my kids, I liked to mix in a combination of physical activities, because all kids are familiar with that, along with intelligence, along with common sense kinds of things.

That way, there wasn’t an over-emphasis on just one quality, and a reinforcement that a balance is good.

I liked using an obstacle course as the last one, because it gives the best opportunity for you to mix brains, bravery, common sense, and strength.

They jump over things, they solve 12 dimensional puzzles, they climb walls to get away from pits of sticky goo, they help each other to finish a maze (emphasizing the need for teamwork), etc.

The point is, Lyla and Bendle emerge victorious. Hoo-RAY!