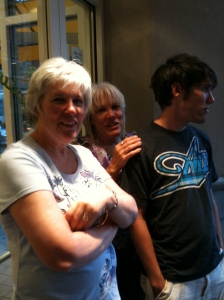 My wife, Rebecca, and I just got back home from a very short vacation during which we returned our son Andrew to college in Denver. While there, we paid a visit to her sister, Naomi. (Photo, l-to-r: Naomi, Rebecca, Andrew)

Naomi is a joy: fun to be around, a wonderful musician and private lesson music teacher, a do-it-yourselfer, a gardener (we had fresh-picked raspberries every morning) …and a packrat!

But, in one of those brief flashes of joy that only a lifelong packrat could experience, Naomi gave Rebecca a thick bundle of all of the letters my wife had sent her sister over the years, beginning around the time they were both freshly graduated from college – more than 30 years ago.

Rebecca has been having fun reading the letters…reminiscing about old jobs, being reminded of fun trips, re-encountering the hopes and dreams of earlier years.  But, amongst this personal archaeological dig, there have been a couple of extraordinary little surprises.

One of them, we ran across last night.  It turns out that Rebecca wrote many letters on scratch paper… basically the clean reverse side of any printed, waste paper.

And as it further turns out, the letter she read last night was written on the back-side of a flyer that Rebecca used at her job as the resident Home Economist at a Foley’s department store, at the time.  Here is a picture of the top half of the flyer. 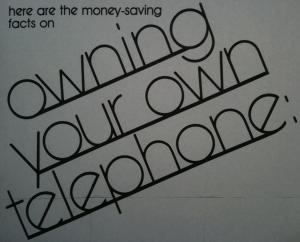 So, what’s going on here, you may ask?  (Especially if you are under the age of 45!)  Well, here’s the deal: it wasn’t that long ago – just a generation, in fact – that actually owning your phone in the U. S. of A. wasn’t the norm.

Indeed, it was around the same year that Boy George was crooning the Culture Club’s way to the top of the charts with “Do You Really Want to Hurt Me?” that the average person was encountering the first opportunity to actually own their telephone.

Up until then, if you had a residential phone, by definition you were almost universally a telephone “renter.”  That’s how much control over the tools of communications “Ma Bell” (i.e., AT&T, before the break-up and subsequent re-integration) possessed.

But, in the early 1980s, personal telephone ownership became a possibility for the masses.  And, merchants like Foley’s (a large, mostly Texas-based department store that was later purchased by Macy’s), began to offer seminars to assist households, mainly still led by women, with tips for smart phone ownership. 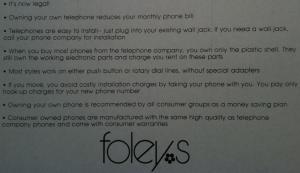 Thus,  the bottom half of the same flyer (click on it at right, to enlarge) previewed valuable tips to be gained by the attendee wise enough to invest their time taking the class, such as:

As Rebecca and I re-read this flyer and were reminded of that time, it was just so other-worldly to think that it wasn’t that long ago when you weren’t free to own your phone.

In this day-and-age where, as Don Tapscott aptly put, youth are born into and bathed in bits, it’s inconceivable to think that one couldn’t even own a phone, much less have to live with it being tethered to a cord and an RJ-11 wall-jack.

The whole encounter kind of gave me the brief urge to become a middle-aged packrat.  If nothing else, just so I could look back at some blog posts (if they still exist in any similar digital form) in 20 years to see what we were doing in 2011 – the year GaGa topped the charts – and how ridiculous our mobile communications norms then (now) seemed to be.